The humble brinjal seems to have caught my fancy! Not because of its dark violet colour and smooth texture of its skin but primarily because it is a “come to the rescue vegetable” when I am in need to rustle up something real quick.
My previous recipe involving the humble brinjal was slightly on the unconventional side and was the cause of much debate because of its slightly un-appealing appearance. So this time I decided to stick to a conventional one drawing inspiration from a recipe that was passed on to me earlier, by a friend.
The ingredients I used were as follows :
1. A whole medium sized brinjal.. Diced into small cubes. I was lucky that our refrigerator threw up one with a green skin that added a bit of colour to the dish
2. Salt and turmeric…. In pinches, to coat the diced brinjal and leave aside for some time.
3. Cinnamon… One stick roughly 2 inches in length.
4. Dry Red chillies… 2-3 nos
5. Cardamom and clove… I used 1piece of small ones but 2 should also be fine.
6. Tejpatta… 1 piece
7. Coriander… Whole… A tablespoon is what I prefer
7. Raisins… A fistful.. For those who love the sudden pops of sweetness in bites of their food.
8. Onion… A medium one diced fine.
9. Garlic…. 3-4 pods. Shredded very fine.
10. Oil… White. Will be needed in two stages…once to fry the diced brinjals and thereafter for the final round of cooking.
11. Cumin powder… Can be varied as per one’s taste.
12. Salt
13. Sugar… A pinch, to lend that dark texture.

In the heated oil, I fried the diced cubes of brinjal to medium proportions and ensured that i removed them before they start getting a coat of black. Removing them from the deep bottom pan, I kept them aside.

Brinjal has this tendency to absorb oil during the process of getting fried. To avoid this dish from becoming too oily, I made a mental note to try out the same recipe by frying the cubes in an air drier some day. Meanwhile, onward with my current recipe! I added some more white oil into the deep bottom pan and turned on the volume of music of my FM radio, while waiting for the oil to start smoking. Once the oil had begun to smoke, I lowered the heat and quickly added the pinch of sugar. Within seconds the sugar had began to caramelize and change colour. It was now time to add the tejpatta, dry red chillies, cardamom, cloves and the cinnamon stick, all together. As the crackle of the chillies faded away and it’s burnt smell wafted up to me, it was time for me to go into an overdrive. Clutching at the fistful of raisins with one hand and the tablespoon of coriander with the other, I threw them quickly into the oil. Quickly retracing my steps now i picked up the garlic and the onion slices and threw them into the oil in one swoop, wondering whether it was worthwhile to visit a popular Calcutta restaurant sometime in the near future, to learn a trick or two from the teppanyaki chef there.

The hard work complete, it was time to relax and have a sip of the beer while the hot oil went about its work, encompassing all the ingredients and coaxing them to let out their respective aromas.
After having stirred and sifted the ingredients a couple of times, I put in the final ingredient of salt and cumin powder and ran the flat spoon through the mix a few more times to ensure everything have had a chance to mix properly. With no more interventions from my part being necessary, I began taking larger sips of my beer in quick succession and watched the oil in the pan, which had got soaked in, begin to re-appear slowly, at the edges first followed by a faint hint of glaze making an appearance on the top as well. It was time now to put the previously fried brinjals back into the wok.
That done, I ran my flat spoon through the mix briskly, a couple of times, to ensure the masala now had a chance to reunite with the long lost cubes of brinjal. Finally it was time to cover the wok with a lid and let the moisture inside cook the ingredients for a couple of minutes.

The dish tastes best when consumed with either rotis, parathas or Puri. However, it also goes equally well if consumed with the simple plain hot white rice. 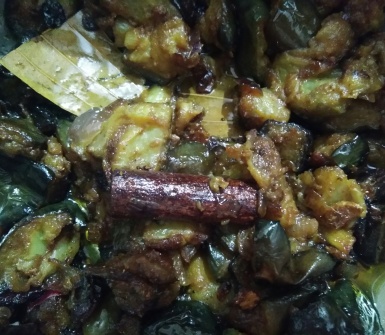 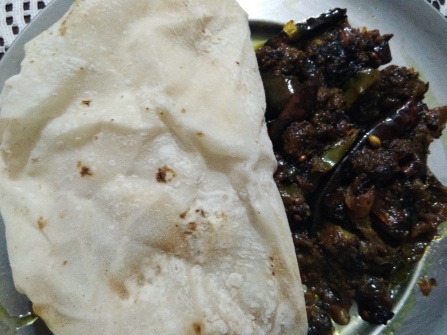 Born in Jamalpur, near Munger, Bihar in the year 1968, my childhood was spent in fun and frolic amongst the beautiful scenic landscape of the small town of Ranchi. An engineer by qualification I have been working in the field of minerals and metallurgy for more than twenty years. Writing and cooking are passions that I pursue during my spare time. Another thing that I am passionate about is our very own country, India. As they say, a lifetime is probably not enough to explore the different corners of India and savour its sights, sound and taste. So i like to read and travel as much as I can in an effort to get to know about our great Country. Currently based in Kolkata, I can be reached at gdutta17@gmail.com. View all posts by gdutta17